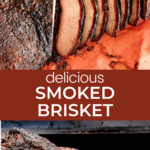 Smoking brisket isn't for the faint of heart. It's for those of us who are tenacious, and willing to try and try until we get something right.

And hooo, boy, friends, did we ever get this one right.

The beauty is that once you figure out how to smoke the perfect brisket, you’ll always smoke a great brisket.

This is a LONG informative post, so if you're familiar with smoking brisket before, scroll all the way down to the printable recipe card at the bottom of the post.

If you aren't BFFs with brisket, I hope the information in my step by step guide will empower you to smoke a Texas-style brisket

This recipe is dedicated to smokin' the whole thing! 😉

No. 1 --> This recipe calls for a whole packer brisket - this is the common way to describe an entire brisket. This cut is comprised of 2 different muscles, separated by a layer of fat. The flat - which is the long, lean, flat part and the point or deckle - is a thicker, pointy muscle with excellent marbling.

No. 2 --> Spend your time on the front end and trim that brisket! A good trim at the beginning of this process will improve the quality of your brisket.

No. 3 --> We're here for a long time - no for real. This recipe owes its delicious tenderness to a long slow smoke at a low temperature and finishing at a higher temperature. This long cooking process ensures the breakdown of the tough connective tissue and muscle fibers for a juicy brisket at the end.

No. 4 --> This recipe is inspired by Aaron Franklin's method of smoking a brisket, although, we do not wrap during the smoking process! We have tried both, wrapping with peach butcher paper and unwrapped and I prefer the texture of the bark on an unwrapped brisket.

No. 5 --> Dedicate a towel to your smoking endeavors. We have a one-off bright blue beach towel that has some holes in it. We've assigned that one to be the "brisket towel". Trust me, you don't wanna wrap your body in a strangely meat-scented towel after a shower.

The ingredient list on this one is short and sweet, but we are making our own rub, so it will seem more daunting than it is. You'll likely have most of that in the cupboard!

Brisket: This recipe is written for a whole brisket. As always, buy the best brisket you can afford. In my small town, I rarely find brisket at the grocery store, but often find prime brisket at Costco. The better the quality of beef, the more likely you’ll have a great brisket at the end.

Brown sugar: I almost always make my own rubs, and I learned while smoking pork butts that I love rubs with a brown sugar base. The long cooking time really helps to caramelize the sugar in the brisket rub and create a delicious bark.

Spritz: We always spritz with root beer, I just love the flavor, but many people use apple cider vinegar, apple juice, or even Dr. Pepper! I find the root beer adds a little extra layer of flavor!

How To Trim A Brisket

Kevy is the Chief Brisket Trimmer in this house. Here's how he does it:

How To Smoke A Brisket

This recipe makes enough for 1 large packer brisket. If you're cooking more than 1 packer at a time, simply double the rub recipe and use more root beer. If you're cooking a half-packer, or separated point and flat, you'll need to halve the rub and shorten the cooking time.

Keep your leftover brisket in an airtight container in the fridge for up to 4 days. If you need to store it longer than that, it can be frozen for up to 3 months.

Good things come to those who wait. Same with great briskets. Kevy and I believe in the low and slow method of brisket cooking and getting the timing right can be a little tricky, so here's how we do it:

Start your brisket the night before you intend to eat it. We usually account for an 18-24 hour smoke, depending on the size of the brisket, PLUS 1 + hour rest time {allow ~ 1 1/2 hours per lb}.

Don't worry, we're still talking about beef brisket and not the beat-up stick shift we all learned to drive on!

When it comes to cooking a big piece of meat, like briskets and pork shoulders, you'll notice that the internal temperature stops rising. The science behind it is basically that as the heat from your smoker evaporates the moisture in the meat, it cools the surface of the meat. Push me - pull you kind of thing!

Once the moisture has slowed/ stopped your brisket will leave the stall.

With a cook like this, where the goal is low + slow, we ride out the stall. With higher temperatures, the stall is shorter.

While almost all meat should be rested before serving, there is a large difference between a 6 oz steak and a 16lb brisket. Larger pieces of meat need a longer rest period after cooking to redistribute and reabsorb the juices within the cut.

While your smoked filet mignon won't lose a lot of heat during its 5 minute resting period, your brisket will lose significant heat over its 1 hour resting period.

The way around that is to wrap it and throw it in a cooler!

The same way a cooler keeps your beer cold, it will keep your meat hot!

This is also why I recommend starting your brisket early because even if it's done early, it can be rested in the cooler for up to 4 hours and still come out hot enough to need oven mitts to handle!

{And from one host to another, it's way better to have your main course finish early than have a house full of hungry guests!}

One of my favorite things about smoking a whole brisket is that there are SOOO many leftovers! Leftover brisket adds a delicious smoke flavor to any dish you add it to.

Smoker: We have and LOVE a Traeger Timberline 1300. We kind of purchased it on a whim, but I don’t think I could live without it now! This recipe will work with a pellet smoker, an electric smoker or even a charcoal grill, like Camp Chef, Pit Boss, or Big Green Egg!

Thermometer: My Timberline has a built-in thermometer, so I usually use that, or my Meater+. It’s important to use a meat thermometer when cooking a brisket because the best way to cook any meat, you’re better off to cook to temperature and not time.

Please give it a star rating in the card below and leave a comment. This helps me to create more content you enjoy!

Get in touch with your inner pitmaster and whip yourself up a smoked brisket. This recipe will walk you through how to smoke a brisket the low and slow way!

This recipe makes enough for 1 large packer brisket. If you're cooking more than 1 packer at a time, simply double the rub recipe and use more root beer. If you're cooking a half-packer, or separated point and flat, you'll need to halve the rub and shorten the cooking time.

Keep your leftover brisket in an airtight container in the fridge for up to 4 days. If you need to store it longer than that, it can be frozen for up to 3 months.

Pin this how to smoke a brisket guide for later!

Note: This smoked brisket recipe was originally published in June 2020 and was updated in March 2022 with new photos. 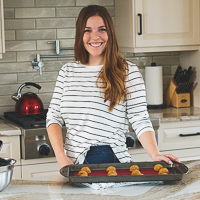